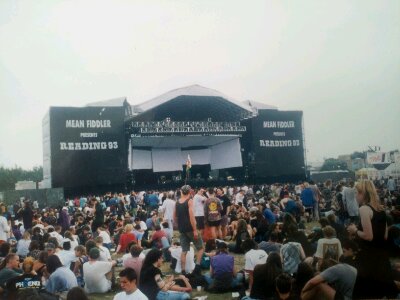 1993 was the year that we met The Americans at Reading Festival, and they were some of the most entertaining neighbours that I’ve ever spent that annual August holiday weekend with.

When we arrived at the campsite on the Friday – (in ’93 I went with two friends, one of whom, Lori, has since passed away making this an especially treasured memory of mine) – it was already quite busy, and we had to grab whatever space we could.

Olly and Lori. One of these people will soon be very drunk.

It just happened that there was a space in the the corner of the field, with very little passing traffic, right behind a large encampment of tents and pick up trucks, which conspicuously displayed several US flags. There didn’t appear to be anyone around at the time, so we pitched our tent and went in search of all the usual immediate essentials; arena wristbands, food, festival programme etc. before making our way back.

As we neared our tent, we could tell that the neighbours were back. On the roof of one of the giant pick-ups were two large p.a. monitor speakers, blasting out Jimi Hendrix at considerable volume. This was an encouraging sign, as we had neglected to bring anything in the way of audio equipment, and I don’t think our car stereo would have been able to compete anyway.
Always keen to meet new people, Lori, Olly, and I wandered over to say hello.

It turned out that they were USAF personnel based in the UK and had been on site since Wednesday night. I’ve trawled my memory, and the only one whose name I can remember is Art, a gigantic bloke with a shaved head, a massive grin, and the build of your average cage fighter.
I think there were about 8 of them altogether, two of them women, all really friendly in the way of Americans abroad everywhere, (“Oh, we luuuve your country”) and straight away they took to Lori, with her infectious dirty laugh and outrageous clothes and make-up.
Well, it wasn’t long before we had joined forces – pardon the pun – with them, and spent the best part of the weekend with them.

They were there primarily to see the frankly astonishing Rage Against the Machine, who were playing that night

Now that’s what I call a line-up!

The rest of the afternoon was spent exploring the various stages and checking out a few bands, the Flaming Lips being a highlight.

After returning briefly to the camp for supplies, and to hook up with Art and Co, we went back to take our places for the Rage Against the Machine set.
They were, of course, extraordinary, with their performance being made even more unique by the fact that the frenzied drummer, Brad Wilk, played the whole set with his back to the audience.
During the latter part of the night Olly wandered off somewhere, and Lori, the yanks, and I went on a trip around the site to check out some of the after hours activities, ending up back at our combined camp.
I think we all passed out around 4.30am, by which time Olly hadn’t returned.

One of the things the Americans liked doing were beer bongs.
A beer bong, in case you don’t know, is a length of syphon tube or similar with a funnel in one end.
The intended victim recipient of this device would then place the end of the tube in their mouth, and beer would be poured into the funnel. Raised high above their head, gravity forces the beer down the tube like a supercharged yard of ale.
They had been doing a conspicuous number of them on Friday afternoon, and Olly had stood and scoffed at the puny strength of the Bud Lite they were using. We, being from Sussex, and hardened cider drinkers, had brought with us scrumpy, Merrydown, and for that get-smashed-quick tipple, Diamond White.

Art (kneeling) and the art of beer bonging.

Anyway, as I said, Olly had disappeared with some other new friends the night before, and would only make his reappearance whilst Lori and I were trying to get a couple of hours sleep.

I shall let Olly himself take up the story;

“What I remember most about the ‘bong’ experience was getting back to our encampment (a car and a tent) at around 7.30am, and our American cousins were blasting out “Fuck you I won’t do what you tell me”, and I seriously needed to crash out.

I went and asked them to turn it down which fell on deaf ears, so I challenged the big fella, Art, to a bong, and if I won, they would turn it down so I could sleep. This time, it was a 1.5 litre bottle of Diamond White.

I went first, and took the whole lot, and they were so impressed (and Art chickened out) that they did turn it down. I made it as far as the entrance to the tent, and collapsed half in and half out. Following that, and when I woke, you and Lori were there, and I think the Yanks cooked us some breakfast.”

So, there you have it. Straight from the horse’s mouth, so to speak.
Thank you Olly, my first eye-witness contributor.

It was only after we had been given the aforementioned breakfast, that we realized one of our new mates was missing.
Again, I must apologize for having forgotten the rest of their names, but I suspect he was called Chad, or Brad or something similar, and he had been the most rabid RATM fan. It turned out that whilst engaging in that staple of rock moshpits the world over, Slamdancing, he had managed to break his leg.
Being so into the music, he refused to be taken to the first aid tent (and then to hospital) until they had finished their set.
And the encore.

I leave you with another burst of the stars of the weekend.

Let’s hear it for Rage Against the Machine!

Thank you and goodnight.

Posted by dalecooper57 on July 15, 2012 in Music festivals, Personal anecdote

2 responses to “Rock stars and stripes…”