HAPPY ANNIVERSARY said the WordPress notification I received last week, surprising me with the realisation that Diary of an Internet Nobody has now been ranting and musing its way across the blogosphere for two whole years.

My initial reaction however – one of surprise that I’d been writing for so long, (since I only think of myself as a beginner, still getting to grips with the discipline, so to speak) – faded, as it occurred to me that writing stuff down feels so natural now, that I can’t really conceive of not always having done it.
Although you only have to read that last sentence; well look at it, hyphens, italics, parentheses, mangled tenses, commas all over the place, to see that I still have some work to do in the rambling tangent department.

Only the other day I was reading a post on Being Ron about how many bloggers change the look and feel of their blogs on a more or less regular basis, and that Ron liked to give his blog a makeover occasionally to keep it fresh.
This is something that I’d never considered before, having settled on the desk diary-themed look (because, well, it was obvious) after stumbling upon it when looking for something to replace the very dark, red-on-black theme I began with, and now I can’t bring myself to abandon it.

Do these things really matter to you, my lovely, intelligent, extremely talented and good looking readers?
Do any of you actually click on that e-mail notification, thinking; “Oh dear god, if I have to read another witty and erudite article, surrounded by that faux-leather and digital stitching, I’m going to leave a pithy comment” ?
Your feedback is, as ever welcomed and appreciated…

During my recent brief sabbatical from the blog, I visited family and friends in Sussex, where I managed to fit in; my first visit to my mum’s new house; a pleasant stay with my sister, (I was there when she received her presentation copy of Ho’s “Spacehopper incident” cartoon that he kindly sent her by post, which she will apparently frame and proudly display); a few days in the company of my old friend Trevor, and a trip to Brighton to see Ho himself.

Arriving in Crowborough on the Tuesday evening to the faultless hospitality of my sister – meal on the go, cider in the fridge – I briefly saw my niece and nephew the following morning before they were whisked off to school and then made my way out into Winnie the Pooh country, Ashdown Forest, to where Trev was staying in Hartfield.
Unfortunately this normally simple journey didn’t go quite according to plan, featuring as it did, me crashing into the back of someone’s car as they braked in the wet at a narrow bridge I’d completely forgotten existed, having not been out that way for nearly twenty years.

The gentleman whose car I damaged was very good about the accident, saying only that he “wished you’d done it a couple of months ago when I had my old car, I could have made a killing on the insurance” and when it also turned out that he worked for the company in whose building I’d shared a flat whilst living in Crowborough, well, we parted on amiable terms.

My stay with Trevor was a predictably laid back affair, involving a few visits to country pubs, tooling around the countryside in his open topped sports car and making a special nostalgic trip out onto the forest to visit A.A. Milne’s hundred acre wood, where the actual Pooh Bridge stands.
A game of Pooh sticks took place of course, in which I claimed victory, although it was a close run thing.

Boys will be boys. 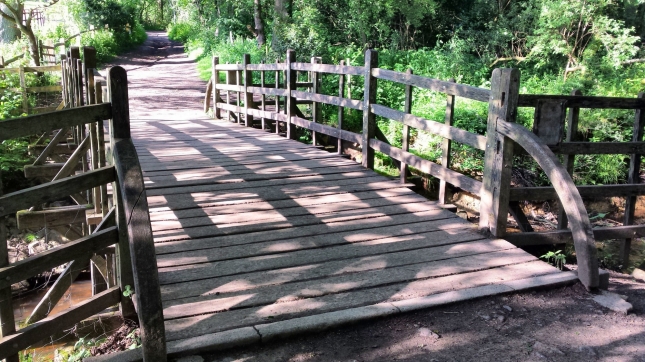 There was also a box of old photos to root through, yielding this gem from the turn of the millennium, when the pair of us were somewhat more hirsute. 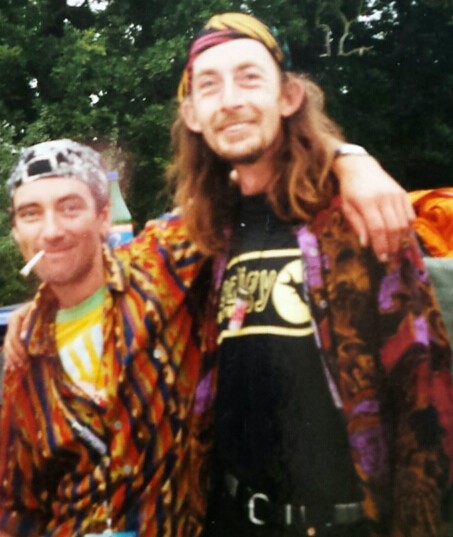 I took my leave of Trevor on Friday morning, suitably refreshed and relaxed, returning to Crowborough to do the familial rounds once more.
I dropped back in to see mum, then to Kerry’s for one final chat with her and Oly, (a truly top man who has the irrepressible enthusiasm of a teenager, the enviable upper body shape of a weightlifter and both legs missing below the knee. In some people I imagine this would put a bit of a crimp in their style, but to Oly it seems nothing more than an excuse for jokes about not having to worry about smelly feet and numerous amusing anecdotes concerning uncooperative prosthetics falling off at inopportune moments) before taking to the road again for the journey down to Brighton and a Friday night out with Ho.

Ho is very switched on when it comes to local events, working as he does for an entertainment promotions company, so he had already got us tickets to a gig at The Haunt, a converted cinema screening room, on the seafront near the famous Brighton Pier.

There were three bands playing, but three weeks have passed and I’m ashamed to say I’ve forgotten the name of one of the support acts, although I do remember Milk and Biscuits and you can sample their material HERE.

The headline act certainly were memorable though, there’s no doubt about that.
Fujiya & Miyagi put on a great show. With stuttering, glitching visuals projected behind them they provided a pounding, mesmerizing set of precision-tooled, clinical synths, enigmatic vocals (some improvised from audience suggestions) and a great live drummer.
To give you a feel for the show here are the obligatory fuzzy gig photos and a link to a particular favourite of mine, the video for Flaws. 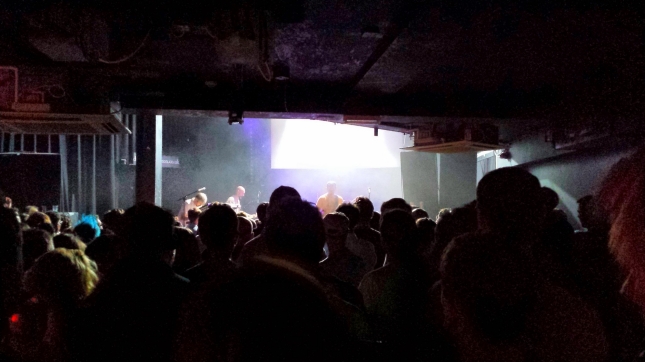 So it was that, after breakfasting with Ho and saying my goodbyes, I left sunny Brighton on Saturday morning and made my way back west to Devon, arriving with only ten minutes to spare to pick up the keys to my new lodgings.
I am now located on the edge of a large park, one of my favourite parts of the town and, due to the smoking ban in the house, I have taken to strolling over the road in my slippers with a mug of coffee, to enjoy a smoke in the evening sunshine amongst the trees.
The park also provides me with free parking and the walk to the car in the early morning is equally pleasant.

The first few weeks in my new home haven’t been without the odd minor incident however.
Earlier this week, one of my fellow housemates was “entertaining” downstairs in his room when some candles apparently set off the ear-splitting fire alarms that are fitted throughout the shared house, deafening the other residents until someone worked out how to turn it off.
Fortunately I was in my newly adopted garden across the road at the time, so I missed the aural assault, returning merely to an ominously red-lit and beeping alarm panel in the lobby and a houseful of people with headaches.

Someone not so fortunate was the bloke who was driving his brand new mini along the road, just round the corner from where I was coming out of our front door on Wednesday evening.
I heard the most horrendous CRASH, followed by the sound of constant car horns and ran round the corner to see the aforementioned mini, no driver visible, airbags deployed, stopped dead in its tracks by the small hatchback embedded in the side of it.
Now, given that this happened on a straight stretch of road in daylight, and that the driver I saw being helped out of the hatchback by the staff of a nearby hotel was a lady considerably advanced in years, I can only assume that she had failed to see the mini entirely and turned into the hotel car park as it drew level with her.

Whatever the cause of the accident, it looked quite serious and I called up to fellow resident Rebecca, who had come to her window to investigate, to call the police.
They evidently asked her to give a first hand account of proceedings, as she appeared on the street and approached the scene, staying on the phone until the first of many emergency vehicles arrived to take control of the situation.
Both drivers seemed to have escaped injury and, although a fire crew turned up to mop up the petrol on the road and untangle the ruined cars, that was the end to the evening’s excitement.

As a bonus, Rebecca managed to snap a rather dramatic-looking photo of the emergency services in action, so the credit for this one goes to her.

That about catches me up to the present, but before I go, here are two great songs to play us out:

ONE YOU PROBABLY EXPECT…

…AND ONE YOU MAY NOT.

And I’ll leave you with this gorgeous sunset photo, taken in the park earlier this week. 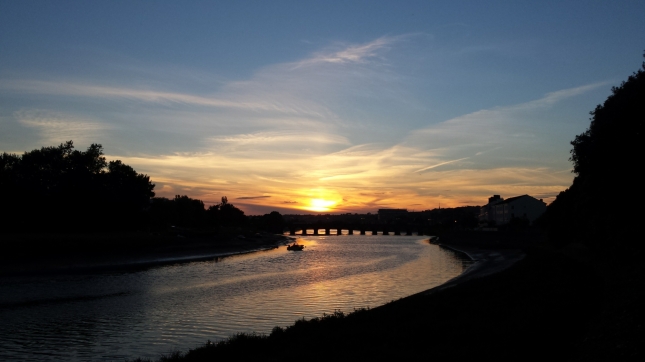