RSS
← #atozchallenge: S is for Self promotion…
K’lee and Dale’s Cosmic Photo Challenge… →

#atozchallenge: T is for Trans and TED…

Today’s A-Z post could just as easily be T for Topical, due to the amount of media coverage the Transgender community has had recently; notably for stories about Caitlyn Jenner, who controversially (and temporarily) won Glamour magazine’s “Woman of the Year” award and for the equally contentious Bathroom Bill, which seeks to ban transgender people from bathrooms that do not correspond to the gender specified on their birth certificates.

But that isn’t the reason for me choosing to use this as the topic for today’s post, I have a far more personal reason; I’d like to introduce you to a friend of mine.

Facebook has always been a fascinating way to make new friends; you can get to know people from all over the world, from all walks of life and from many different cultures (the ones that don’t think the internet is the work of the devil, anyway) and it’s almost inevitable that you will connect with people you never would have met, if you’d had to depend on bumping into them purely by coincidence.

Which is how I met Kelly.

I was introduced by a mutual friend, (one of the many Americans I got to know when I first joined Facebook, five years ago) who had been at school with Kelly and thought that she and I would get on. All my friend told me was that Kelly had recently transitioned from male to female and that she was an airline pilot.
Now, given my earlier statement about making interesting new friends, I could hardly pass up the chance to meet a transgender airline pilot, especially as those are two things I have all but the most infinitesimal chances of experiencing myself, so I got in touch with her and we have been friends ever since.

It wasn’t until I’d known her for a while, however, that I realised what a truly extraordinary woman Kelly is; that is really the only word I can think of that sums her up, there is nothing “ordinary” about her at all, every time I learn something new about her, it just confirms what an incredibly driven, compassionate and caring person she is.

Kelly’s story is one of faith, overcoming prejudice, personal loss and sacrifice and a strength of character and self-belief that most people can only wish for.
She works for an international courier and logistics company, which has allowed her to work with some amazing people, including her colleagues, both at home in Alaska and with children’s charities around the world.

Here are some of the photos that Kelly (on the right in the first picture) has taken on her travels, described in her own words;

“The greatest joy in my life is spending time with orphans. The blessings I receive from these children are immeasurable. It gives me a purpose and a chance to leave a legacy on the lives of children around the world. Thank you Dr. Joseph, for being my host and allowing me to learn more about this incredible place!

For those of you who have a passion for orphans as well, Harmony House could really use your support. Asia has an escalating HIV rate due to many factors and is now affecting young children. I’m including this link, written by my good friend Dr. Joseph. If you get a chance, please take a moment to read. 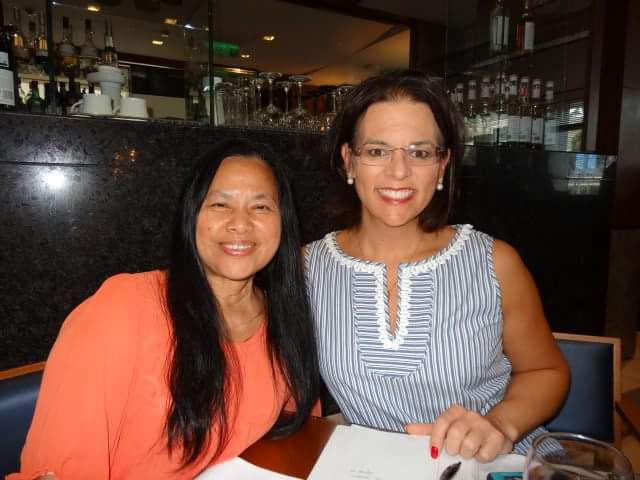 “This is my very dear friend Nicole, the Director of Harmony Home. We met for lunch yesterday to discuss ways to increase financial support for her nineteen shelters in Taiwan and China.

Her story is inspiring and started with her heart; to care for a college student who was dying of AIDS. His family had rejected him and the college expelled him. She took it upon herself to love him when nobody else would.

Combined with her passion, and her determination, she has touched hundreds and thousands of lives of those inflicted with this horrible disease. Today, Harmony Home cares for 102 adults, and over 1000 children. Her love for her children (adults included) is truly a reflection of what James writes, “Religion that God our Father accepts as pure and faultless is this: to look after orphans and widows in their distress…”

She has touched so many lives with such a limited budget. It is with great honor, to call her my friend.”

“Dr Joseph, is like a brother to me, and was there from the beginning standing by me through my transition. He has a heart and a passion for orphans worldwide and was recently nominated for the Nobel Peace Prize.

Megan, is a very dear friend, who has a heart for orphans and recently developed a program to fund 30 orphans in Cambodia.

It’s people like them with such huge hearts that inspire me.”

“This evening we hosted over 300 children from the the Head Start Program. To many, this was their only Christmas and to see their faces lit up, brought more joy than one could imagine. To my fellow pilots who sacrifice a portion of their earnings to make these programs possible, you have my deepest gratitude.”

All of which is pretty amazing, I think you’ll agree; Kelly and her fellow pilots do fantastic work with these kids and really do light up their lives with their dedication and generosity.

But it’s when you hear Kelly tell her story in person, that’s when you truly understand what she has fought through to become the woman she is today. And last year she got the opportunity to do just that, when her logistics company teamed up with TED, the ideas sharing platform, to stage a series of talks on diversity and overcoming obstacles.

I don’t often ask much of you, my lovely readers, but I’d like you to do me a small favour, just this once.
I know you all  have busy lives and may not have time right now, but you’re bound to have a spare ten minutes tomorrow (it is Sunday, after all) so please watch Kelly’s talk in the video below, I don’t think anyone can fail to be moved by the courage and dignity with which she tackles an emotive and deeply personal subject.

You can learn more about Kelly and the TED/UPS talks at this link.

Update: Kelly has asked me to make it clear that she is part of a team and, as such, only a small part of the good work they all do.

“On my time off I volunteer as a charity coordinator for my pilot union in Anchorage.”

← #atozchallenge: S is for Self promotion…
K’lee and Dale’s Cosmic Photo Challenge… →

8 responses to “#atozchallenge: T is for Trans and TED…”