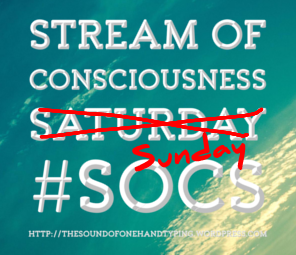 Welcome back to this story, continued in the usual SoCS way by using the prompt that Dan Antion (sitting in for Linda G Hill this week) left us for inspiration;

” “ooooh, aaaah,”. Use it as a phrase, or break it apart. And since I love bonus points, bonus points if you somehow manage to start and end with all or part. “

Scene: Interior of the black van.

Patrick is driving, with Adam beside him in the front, while Carlisle is seated behind Patrick, gun trained on Cathy, who is handcuffed to the bench opposite.

“Aaahh, isn’t this nice; quite the reversal of fortune, wouldn’t you say? The tables seem to have turned somewhat, since our last little road trip.”

Carlisle grins at Cathy with no humour at all and is rewarded with a look that should have melted him on the spot, but she doesn’t say a word.

Patrick looks at Carlisle in the rear view mirror and tries to keep the anger from his voice when he speaks.

“So, tell me again why you’re so convinced she’s a Department agent.”

Carlisle doesn’t get a chance to reply, Cathy leans forward and shouts over the sound of the engine.

“I told you once, shut your mouth.”

Carlisle reaches over in a matter of fact way and slaps Cathy once across the face, not hard, but hard enough to silence her

“Oh, I think there’s every need for it, but you’re the boss. For now, anyway.”

Adam casually leans back and waves his hand at Carlisle, who is instantly slammed back against the side of the van with a loud bang, held there for a few seconds and then released. He slumps forward, breathing heavily, then looks up at Adam with an evil expression as he pushes himself up into a sitting position and grabs the gun from the seat next to him.

Adam looks unconcerned but irritated and turns back to watch the moonlit road rolling past outside as he says;

“Just tell the story and let’s do without all the strongarm stuff, shall we?”

Carlisle rubs the back of his own head where it had made contact with the van and scowls at the back of Adam’s, but says no more about it and returns to covering Cathy with the gun as he speaks.

“I don’t know why it never occurred to me when I first saw the file, maybe because she was blond back then, but once I saw her in the black-ops gear, it clicked. Funny the things that trigger your memory, isn’t it?

Anyway, I first bumped into ‘Cathy’ here – she called herself something else back then, I forget what – about fifteen years ago, on a job for your friend, Felix Braithwaite.
You’ve looked after yourself, I’ll give you that,” he winks at Cathy, “I bet she’s older than you think she is, but then I expect that was the idea; the innocent little nurse, helping you escape the clutches of the evil doctor. And you certainly fell for it, didn’t you?”

“But…why? I don’t understand, why on Earth would The Department want me to escape in the first place?”

“So they could field test you, of course.”

“Well, they obviously needed to find out what you were capable of, out in the real world.
I mean, I’m no expert, I didn’t even know what they were doing with you or their other guinea pigs, but that’s their standard procedure; when they think an asset is ready to go live, they’ll send them on a field trip, out into the community, so to speak. They would usually monitor progress very closely, but you rather put the cat among the pigeons when you took out Endicott and his goons, ooohhh, they didn’t like that at all, so that’s where your little friend came in.”

Carlisle looks at Cathy with something like professional respect.

“I’ve got to say, I’m impressed with your ability to improvise, but you should have got him under control before he got out of the country. That’s what sealed your fate, they thought you’d gone native on them and you were on the shit-list from then onwards, I’m afraid. Still, you had a good run, up until now.”

“I don’t answer to you, I don’t care who you think you are, you’re just as fucked as the rest of us.”

“That’s an opinion, certainly, but I don’t think it’s set in stone just yet.”

Then Adam interrupts from the passenger seat.

“Is this the place?”

Carlisle peers between the seats and sees they are approaching a slip road that leads off the motorway, the familiar shape of derelict buildings ahead of them, silhouetted against the skyline.

“That’s it, turn off here and take the second road on the left, it’s about a mile and a half.”

The last few minutes of the drive are made in silence, the van finally bumping over the rough surface of an unmade road and turning in through the sagging, rusted gates of a deserted factory.

Patrick pulls up in the shadows at the side of the building and switches off the engine.

Carlisle stands up and slides open the side door of the van.

Posted by dalecooper57 on July 2, 2017 in Blogging, Fiction, Literature and writing, Stream of Consciousness Saturday, The write stuff.