The second category that gets a Tina is my favourite TV show of the year.
Which is quite a tough one for me to set myself, now I come to think about it.

There’s so much of it to choose from, apart from anything else.

Don’t get me wrong, I’m not a couch potato, I won’t just sit and stare at the TV for the sake of it.
I don’t watch soaps, sport, quiz shows, embarrassing bodies/smells/hygiene problems/neighbours-shows, talent shows, or ITV.

I do watch a lot of documentaries, drama, Sci-fi, comedy, panel shows (HIGNFY, QI, and the like), oh, and of course, cop shows, lots of cop shows.

So which, if any, of the scholarly English country house murder mysteries, or the glossy, jump cut, lens flare packed, mega-budget US police drama series would I bestow my shiny new award on?

Actually, none of the above.

My favourite crime series of this year (well, it concluded this year) is a dark, brooding, mildly depressing, subtitled Scandinavian psychological drama, featuring a miserable and disobedient female detective with a liking for chunky knitwear.

I am talking, of course, of the surprise BBC4 hit of the last couple of years, the atmospheric and brilliant The Killing, (not to be confused with the woeful US remake of the same name) or Forbrydelsen to give it it’s original, Danish title.

The first series (shown two years ago) follows the police investigation into the murder of a young girl, and the show is structured in such a  way that each of the twenty, hour long episodes covers one day in the investigation.
The lead character – played, with extraordinary intensity, by Sofie Gråbøl – is the aloof, distant, and emotionally inept detective Sara Lund, and she is a big part of what makes the show so compelling.

The plot, which starts off as what appears to be a straightforward, if intriguing, whodunnit, quickly expands to take in politics, family feuds, and Lund’s ongoing attempts to complete her job in Copenhagen and start a new life in Sweden with her boyfriend.
It keeps you guessing with some nice twists, but never becomes convoluted, and the tension is palpable throughout.

Series two, which was screened here last year, was only ten episodes but kept the same one episode to one day format.
This time we’ve moved on two years, and this case involves soldiers that served in the Afghan conflict. This results in Sara being sent to Afghanistan as part of the investigation, which does change the feel of the series slightly, as the moody and atmospheric Danish locations are part of the show’s appeal, but nevertheless, it stays absorbing, right up to the thrilling finale. 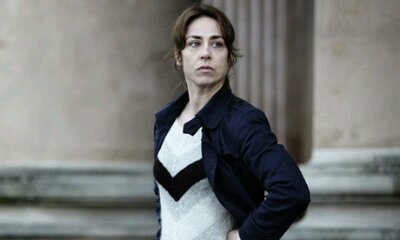 Sara Lund – So successful, for series 3 she got a new jumper.

This year’s third and final series was a darker affair altogether, and given the previous storylines, that was saying something.
A kidnapping is the starting point to this concluding part of what was always intended to be a trilogy of stories with the enigmatic and increasingly unpredictable Lund as it’s focus.

To say any more about the plot would be a crime in itself, but I would strongly recommend that you seek it out.

And for those of you who are already devotees, you’ll be glad to know that two other exceedingly fine Scandinavian shows that BBC4 introduced us to are to return. Both the political drama Borgen, and pretender to The Killing’s crown, Swedish/Danish hybrid, The Bridge will return in the new year.