[Today’s post was written in collaboration with Mr Adam Pain from the excellent blog, A World Of Pain. Check it out for articulate and acerbic wit, searching insight and more.]

I doubt even the inhabitants of Camden Town in London could name too many historic events that have occurred in their Bohemian neighbourhood – but today that changed significantly, in a blaze of technicolored publicity. Mind you, this is Camden we’re talking about. The strength of some of the weed on the streets these days has probably rendered a good percentage of Camden’s most notorious residents barely able to remember all of their vowels.

At one minute past midnight this morning, Sean Adl-Tabatabai and Sinclair Gray Treadway made history by being (probably) the very first same-sex couple to get married in the UK. They tied the knot in Camden Town Hall, one of many couples around the country who rushed to be among the first to take advantage of new legislation, passed last year in the House of Commons by 400 votes to 175, allowing gay and lesbian couples full married rights under UK law for the first time.
(Watch Sean and Sinclair’s historic ceremony here.)

That we have taken such a ridiculous length of time to reach this stage in our social evolution is somewhat bewildering. I mean, given that the (even then, long overdue) Sexual Offences Act finally decriminalised homosexuality in 1967 – and therefore society in general was presumably at least vaguely aware that behaviour among some consenting adults which was previously considered “unnatural” or “unacceptable” was to be viewed with a new tolerance – why has it taken another 47 years to allow those same accepted members of society the same rights as the rest of “us”? 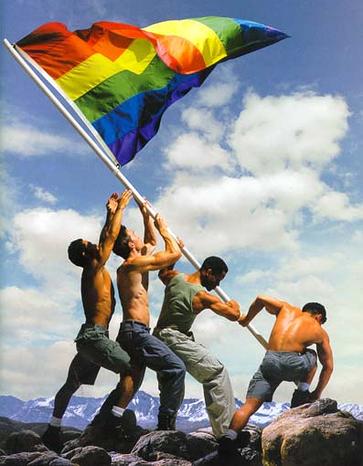 Insert inappropriate “Getting it up” gag here.

Religion, of course, is largely the answer to that.
But theological arguments briefly aside, the fact that the simple act of legally recognising a loving relationship is seen as such a huge milestone in our social history only serves to highlight the continuing prejudice and persecution of the LGBT community in general.

For example, two other less edifying stories that have picked up attention from a media attuned to the controversial or salacious, both feature the sort of comic-horror hate figure who regularly make the news such a jaw-dropping spectacle.

There has been worldwide condemnation of Uganda’s record on gay rights abuses, (sentences range from seven years imprisonment to torture and death) but less well known is the part played by American evangelist and candidate for Governor of Massachusetts, Scott Lively, in influencing it. He’s a complete charmer, in case you hadn’t guessed.

Lively travelled to Uganda on a lecture tour, his extreme views on homosexuality coming to the attention of the government, keen for any new “evidence” to strengthen their case for more draconian laws to be introduced.

He claims to be on a crusade to “protect civilisation from homosexuality”, something he believes is bent on a mission to “defeat marriage-based society and replace it with a culture of sexual promiscuity”. That’s an astonishing opinion, given the Greek’s input in actual creating civilisation and their inconveniently liberal views on homosexuality.
Although, bear in mind that this is from the same man who claims to have invented a “Gay Scale” which lists various levels of gayness, all the way up to Monster and Super Macho, the two categories that he says are most commonly occupied by serial killers, paedophiles and, interestingly, Nazis. They just sound like Nintendo bonus characters to me.
His justification for this, believe it or not, is that;

WHAT?! What did he say?!
Yep, he said that.
He also said that the Rwandan genocide, over the border from Uganda, was instigated by a Gay Conspiracy.
Not only that, when confronted with the question of Barak Obama’s condemnation of Uganda’s mistreatment of its LGBT citizens, he said;
“I think Mr Obama may well be a homosexual himself, he’s certainly a radical homosexualist”
by which made up term he apparently means that;
“He (Obama) is lending the weight of his office to a movement that’s goal is to overthrow the Judean/Christian sexual ethic and replace it with the gay ethic of sexual anarchy”

This of course fails to take into consideration that many of those dreadful gay people are produced by previously untainted, straight Christian couples, presumably as a punishment for some unspecified sin.

Lucky for us, we have Scott Lively to protect civilisation.

And this man is running for Governor?!

If he gets elected, set a stopwatch – because the precedent set by similar bigoted, evangelical bigmouths isn’t exactly encouraging. Who else reckons it will be no more than eighteen months, before this sociopathic hypocrite turns up with his ratty little tail between his legs, having been ‘scooped’ by the National Enquirer? Photographed in a seedy motel, wearing nothing but ass-less chaps and a Ronald Reagan mask, riding a bored looking rent boy like a rodeo veteran.

Finally we have the demise of someone who will hopefully completely fail to leave even an unpleasant greasy stain on the pages of history to record his existence, the founder of odious hate-mongers and pseudo-religious nutjobs, The Westboro Baptist Church, Fred Phelps.

The “church”, whose mission it is to picket US soldiers’ funerals waving placards displaying such slogans as “Thank God for Dead Soldiers” and “God Hates Fags” have asked for respect to be paid to their founding father, his daughter Shirley saying;
“It would be in extremely poor taste if someone were to protest my father’s funeral just because they disagreed with him. Everyone is entitled to respect in death. What monster would go out of their way to upset my family when we’re grieving?”

That would have been like Ed Gein’s family attempting to ban leather jackets outside his funeral, out of a feigned respect for the American tannery industry.

Oh hang on, I’m forgetting what a decent fellow ol’ Fred was when he was at home with his family, maybe we should leave the last moving words to his grieving daughter Shirley Phelps-Roper;
“My father was a great man who did no harm to anyone. So what if he beat his own wife and children? Doesn’t any good, loving father do that?”

Especially if your paternal role models are all to be found languishing in the desert five thousand years ago, delirious from communicable disease, starvation, heat exhaustion and all that smiting in God’s all loving name.

Only one song seems suitably apt to play out this post I think.
Take it away Tom…