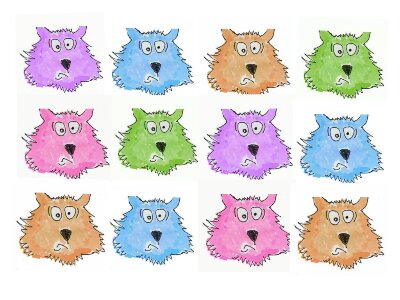 Yes it’s day twelve, the penultimate trip down the tangent trail towards today’s tenuous target.
We start off by sampling a slice of psychedelic space rock, then our journey continues via some gloriously jangly pop and an inside look at one of the year’s nastiest new TV characters, to finish off with a wealth of audio amusement.

On our last outing we ended by paying tribute to the great scientific minds that helped us to find and identify that pesky little particle, the Higgs boson. So I thought I’d start this first leg of the home straight with an album by one of my all-time favourite bands;

1º Hawkwind named their 1977 album after some more subatomic particles and you can get your very own dose of cosmic radiation by listening to the whole thing right now – Quark, Strangeness and Charm
2º And where to go from there but to This Charming Man by The Smiths, fronted by Morrissey.
3º English actor David Morrissey has had great success in the States this year, playing new character The Governor in zombie thriller series The Walking Dead
4º …which stars another Englishman abroad, Andrew Lincoln, who had his first walk-on part in up-to-the-minute satirical newsroom sit-com Drop the Dead Donkey..
5º …which was co-written by Andy Hamilton, creator of Hell-based radio comedy series Old Harry’s Game and presenter of an irreverent documentary on the history and myths surrounding his lead character, The Search for Satan.
6º Hamilton is also a regular guest on BBC Radio 4’s “antidote to panel games”, the fabulous I’m Sorry, I Haven’t a Clue, now presented by Jack Dee.
But here’s the classic line up, with late, great jazz trumpeter and national treasure Humphrey “Humph” Lyttelton in the chair, recording the show in front of a live audience.

7º And I’m keeping to the radio comedy theme for my second-to-last choice of 2013 best bits, mainly because I love it and partly because not enough people listen to comedy on the radio nowadays, despite the fact that many of our most popular TV sketch and panel shows started off on the airwaves before making the move to the small screen.

This show is presided over by a man who is no stranger to TV himself, David Mitchell, who has graced this list once already.
Ladies and gentleman, I give you The Unbelievable Truth.

Enjoy, and I’ll return with the final episode of Tenuous Tina and her Lynx of Love tomorrow.