Welcome back to the fragile plastic box of delights that is the prequel to the CD Melodic Randomiser, a selective plundering of my huge collection of cassette tapes, some of which are approaching forty years old and still going strong.

This selection is made up of music from the eighties and early nineties (the closing half of the cassette’s glory days) both from this side of the Atlantic and the other, not to mention the other side of the border and across the Irish Sea too.

The first of today’s trio is one of two compilations, this is one called Absolution and is themed around what I suppose you would call the indie-goth sound.

The first half is livelier, more spiky and abrasive, with side two demonstrating the introspective side of the genre, building to an angry, bass driven, post-punk classic.

I keep feeling the need to use that word, classic, but it can be applied to so many songs here, including this, from arch-miserablists Echo and the Bunnymen and their 1983 hit, The Cutter…

…then there is this, my all-time favourite David Bowie cover, the Bauhaus version of Ziggy Stardust.

Closing side one is a bona fide goth anthem, The Jesus and Mary Chain with the wondrous Some Candy Talking.

Side two starts softly and becomes darker as it goes on, with Enjoy the Silence from Depeche Mode…

…followed by the surprisingly gentle and sophisticated tones of The Stranglers with this, European Female…

…and Absolution ends with a thundering beast of a song, New Model Army‘s No Rest, which is so good, I’m giving you the full album.

Tape two is another much-played favourite, a solo project from Husker Dü frontman, Bob Mould, and I’ve chosen the single, If I Can’t Change Your Mind from Sugar‘s 1992 album, Copper Blue.

If you like that and want to hear more, you can listen to the whole album HERE.

Which brings us to the last of my random selections for today, a slightly poppier affair, compiling some upbeat chart hits from Scottish and Irish bands of the nineties, from which I’ve picked Orange Juice and their biggest single, Rip It Up…

…and I’m finishing this third dip into my magnetic archives with an absolute, genuine, fully-fledged, copper-bottomed pop (yep, I’m gonna use that word again) “classic”, the sublime Somewhere In My Heart from Roddy Frame‘s Aztec Camera.

Go on, sing along, you know you want to.

I hope you can join me again soon for the next spool back into the past and in the meantime, remember…

Posted by dalecooper57 on August 9, 2015 in Melodic Randomiser, Music, Video

Time to trawl the tapes once more and play you some retro tunes from my misspent musical youth.

Today’s selection from the nostalgic boom box is made up of a magazine freebie, another tailor-made mixtape (with bonus anecdote) and a chil-out classic, so let’s get on with the music.

Q Magazine has been my favourite monthly music publication, ever since I bought issue 11 (featuring cover stars Morrissey and Roger Waters) many, many years ago.
One of the cool things about it was that there would often be free cassettes on the cover (and later, CDs) many of which were loosely themed.
The thread that runs through Livin’ in the ’80s is a pretty straightforward one, compared to some of the more obscure and tenuous collections they managed to crowbar together and it contains some bona fide pop masterpieces.

First up are a pair of electro-pop classics, starting with the Human League and this single from the groundbreaking “Dare” album: Love Action (I believe in love)

…followed by the 80’s most whistleable tune about nuclear devastation, OMD and their peon to the plane that dropped the atomic bomb on Hiroshima, Enola Gay

Side two mixes it up a bit, starting with this raucous stomp from Killing Joke, the anthem of the decade, Eighties…

…and continuing in a gentler vein with Culture Club and a tune I’ll dedicate to my wife, Rhonda, who apparently strutted her stuff to this at every ’80s disco; here’s Time (Clock of the heart)

The second of today’s tapes is a compilation that was made for me by a friend in Sussex in the early ’90s, from just a tiny fraction of his enormous record collection.

He went by the nickname “Tufty” at the time and he was, like me, a massive fan of the late, great John Peel, a fact which resulted in him suffering a highly amusing and rather public embarrassment in our local pub, The Wheatsheaf in Crowborough, (where he worked as a barman) which I’m guessing he would rather forget.

John Peel had a brother.
This isn’t an especially interesting piece of information, except when coupled with the fact that this brother lived opposite the aforementioned pub and was one of the regulars.

One day, Francis, for that was his name, came into the bottom bar of the pub with a visitor in tow (it’s an old, split level building, with the public bar at the top and a sunken lounge on the opposite side of the central serving area) and this visitor looked uncannily like our musical saviour himself, complete with trademark beard.
Plus, he was with Francis, who else could it be?

Sitting in the top of the pub, looking down into the lounge, those of us who cared about such things instantly began discussing whether this was in fact the champion of all things musically cool and if so, would etiquette, coolness and/or star-struck hero-worship permit anyone to approach the great man for a few pearls of his no doubt affable wisdom?

No such procrastination for Tufty however, who immediately went into paroxsysms of delight that such a member of radio royalty would grace the bar with his saintly presence.
He immediately informed us that he was going to introduce himself to John, offer to buy him a drink and attempt to engage the great man in conversation.

The rest of us watched with a mixture of interest, envy and amusement as Tufty, never knowingly short of words, shyly sidled up to Francis and his companion and waited for his chance.

At the earliest opportunity that decency would allow, he politely interrupted, pint in hand, and spoke thusly to the illustrious visitor:

“John, I’d just like to say that I’m a huge fan and it would be an honour if you would allow me to buy you a drink.”

…at which point, the object of his adoration turned to him with a puzzled smile and said;

“Well that’s very kind of you, I’m afraid I’m Francis’ other brother. but thank you for the drink.”

Needless to say, it took a while for my impulsive friend to live that down, but he does compile a very fine mixtape, so let’s get back to the music.

I’m going to pick four from Tufty’s compilation too, simply because it’s got a fantastic range of songs on it and I couldn’t narrow it down any further.

An unexplainably underrated British band from the ’90s, Kitchens of Distinction never got the recognition or hits that they deserved, so to redress the balance in some small way, here is their third single, The 3rd Time We Opened The Capsule…

…along with a song you may know, but a version you may not have heard, this is Trisha‘s cover of Tracy Chapman‘s track, She’s Got Her Ticket.

But I’ll end tape with a pair of cheerful chunks of ’90s guitar pop the first of which is Lancashire’s Milltown Brothers, with 1991’s Which Way Should I Jump?

…and the second is the sublimely jangly Heavenly Pop Hit from New Zealand’s Martin Phillipps and his revolving musical project, The Chills.

Which brings us to the final entry in this chapter of my magnetically memorized musical marathon, tape 3 is a bit of a departure from the rest but just as great in its own way for all that.

So here, in its chilled-out, cosmic entirety, is The Orb and the epic Orbvs Terrarvm

Stay tuned for more archive dredging in the not too distant future, may your spools stay loose and your tape never crumple.

We all have that one album, the one we think of as our own personal musical gem, to be shared with the world in general (i.e. anyone we can get to listen to it) and today’s sequential stroll through my CD collection brings us to mine.
I bought this about twelve years ago and as yet I haven’t found anybody who doesn’t like it, it’s just one of those albums. No matter what genre of music somebody is into, it manages to worm its way into the ears like the biggest pop hits do, yet it seems as if hardly anyone has ever heard of them.

Releasing a CD called “Skyjacked” in 2001 may not have been the most brilliant marketing strategy, but I’ll give Koot the benefit of the doubt and assume it came out before September.
Why Some Bizarre records didn’t reissue it under a different name is beyond me, because it is a genuinely fantastic album.

There don’t seem to be many tracks available by them on YouTube either, but Mississippi Soul, Backbone Gently and Sunshine At Last are, and they’re all worth your time. 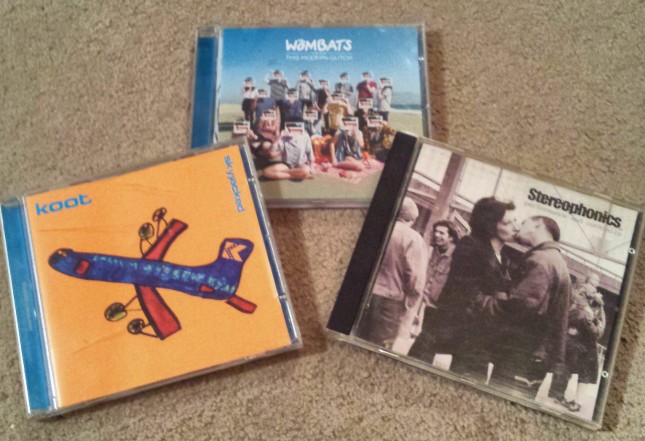 The next band to get the Randomiser treatment have plenty of internet coverage however, so I can present to you “This Modern Glitch” by The Wombats in its entirety…

…followed by my favourite track from the next disc in line, “Performance And Cocktails” by Welsh indie rock stalwarts Stereophonics.
Ladies and gentlemen, The Bartender And The Thief.

As a special bonus, (because I’m about to put it on next and otherwise you’d miss it) I leave you with the frenzied Japanese cartoon tech-punk of The Mad Capsule Markets with Midi Surf.

Posted by dalecooper57 on December 29, 2014 in Arts, Melodic Randomiser, Music