#atozchallenge: D is for Dreeb…

Today’s A-Z challenge is brought to you by the name of a villain in Starship Gypsies, the collaborative writing project from myself and Jerry at jdawgswords.

If you haven’t come upon our little space opera before, click the link at the top of this post and check out the site. 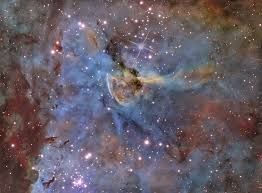 Dreeb watched the uneven, crater-strewn surface of Phobos roll slowly past the observation window of his cruiser and congratulated himself on how close he was to finally catching up with the man who, he was convinced, had robbed him of the last fifteen years of his life.

“Six,” he barked, “when will we be above the target crater?”

The mercenary who Dreeb had christened number six checked a readout on his console, “We should be within range of the drop zone in just under ten minutes, sir.”

Dreeb ignored the sarcasm in the man’s tone; he wasn’t paying his crew of disgraced soldiers and hardcases-for-hire for their manners, just their loyalty and silence. Besides, if the operation went according to plan, he wouldn’t need to pay them the balance of their fee.

“Have the device ready to deploy on the next pass.” said Dreeb, “I don’t want there to be any disturbances on the surface…

Posted by dalecooper57 on April 5, 2016 in A - Z challenge, Fiction, Literature and writing, The write stuff.

Here’s the next chapter of our little space opera, Starship Gypsies, this one written by Jerry…

Pentaethymethalyne-metalliod, commonly called “liquid hell” because of it’s extremely hot and explosive reaction with oxygen, non-reactive with nearly all chemicals and compounds, the stuff hates oxygen. One single molecule of oxygen will spell disaster every time. Therefore, after a short life as a weapon of mass destruction Pentaethymethalyne-metalliod was banned from Earth. It was quickly accepted as a rocket fuel, but it took several deadly explosions to finally isolate it from oxygen. The only safe exposure was in the combustion chamber. Very little oxygen was needed which was ideal in deep space and speeds of near-hyper could be reached. Also special fuel tanks were created to direct any explosions away from the ship structure. Legal tanks had a “rip seam” and extra plating on the vessel-side of the tank. Luckily the The Three Zees had such tanks and only one blew up, leaving them with a engine and fuel.

The plot thickens in my latest post on Starship Gypsies… 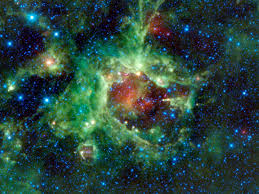 Now they were safely in Earth orbit, Carli knew she only had a few days to prepare, but since the success or failure of the operation depended largely on keeping Lazzaro off balance and distracted, she had to spend at least some time each day working on him.

Whether that meant finding an excuse to wander onto the bridge whilst Toes was doing his gripe ‘n’ groan session and stand in Eric’s line of sight until he noticed her, sitting at his table in the canteen when he was chatting to other crewmen and flashing him an occasional coy smile, or “accidentally” running into him in the corridor when he was taking his morning run, Carli made sure he saw just enough of her to make him uncomfortable, but not enough that he had a chance to talk to her about anything except official ship’s business.

She felt bad about…

Ok, I’ve only just this minute finished writing this new episode of Starship Gypsies, so you can have this for today’s JJIJ post.

Colan Dreeb lay on the new, non-regulation, divan bed in his cell, idly scrolling through the huge collection of murder-porn on his virtual reader unit.

He could hear the sound of his fellow prisoners being marched out into the force-shielded exercise area, from where they would have a 360° panoramic view of the endless, desolate and toxic surface of the planet on which the maximum security prison complex was located.

The designers of the facility had originally intended to make the dome-shaped shield completely opaque, given that there was literally nothing to see outside, apart from the occasional flashes of an electrical storm above the range of immense mountains that encircled the featureless plain where it stood. However, the company who ran the prison wanted the inmates to be able to see just how pointless an escape attempt would be, much like the infamous Alcatraz prison on late twentieth century…

Posted by dalecooper57 on January 26, 2016 in Fiction, Just Jot It January, Literature and writing, The write stuff. 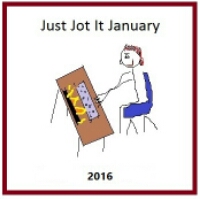 But I think that’s allowed, isn’t it?

He honestly didn’t know what to think.
Was she playing with him, stringing him along until he caved in and asked her, just so she could laugh at his embarrassment?

He couldn’t believe that he wouldn’t remember something, well, something like that happening, no matter how drunk he got, and yet Carli had been so obviously upset that he’d forgotten about it, it made him question his inability to recall anything about even seeing her that night, let alone…anything else happening.

He needed to think and found himself heading to the canteen for coffee.
Well at least he had his pass back, he thought, as he turned into the doorway of the large open space that acted as the ship’s dining area.
He stopped short when he saw Carli and her friend Diaz, sitting at a table on one side of the room, but they didn’t…

Posted by dalecooper57 on January 10, 2016 in Fiction, Just Jot It January, Literature and writing, The write stuff.

Here is the next installment in the steadily thickening plot of Starship Gypsies, the collaborative sci-fi project that I’m writing with Jerry from Jdawgswords…

With only a few days left until the Alice Marie passed into the Sol system, any spare crew members were helping the escape pod survivors to prepare to transition from their lives in the deep space colonies to the higher gravitational environment of Earth.

Increasingly strenuous physical workouts were being scheduled for their daily sessions in the gym, their nutritional intakes were closely monitored, the final medical checks were being done and many of the colonists were taking advantage of the ship’s data store to get themselves better acquainted with Earth’s recent history and social customs.

Lazzaro had spent the last couple of days keeping busy with his regular duties, (not always easy without his security clearance) whilst simultaneously trying to stay out of Toes’ way and find time to track down his missing pass.

Posted by dalecooper57 on January 1, 2016 in Fiction, The write stuff.

Here’s a link to Jerry’s latest post on Starship Gypsies, our collaborative sci-fi side project.